Halloween season is big in America and a great time to visit the South. We have come across this great article by Practical Wanderlust 12 Reasons to Celebrate Halloween in Louisville, Kentucky: A Local’s Guide as they think it's the best time to visit Louisville (other than Derby season, of course). 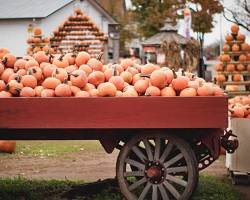 It’s not just the crisp autumn air and crunchy colourful leaves but also unique autumn festivals and events plus an incredible array of terrifying haunted houses, yummy autumn bourbon tasting and gorgeous scenic drives and walks through some of the most beautiful fall foliage in the USA.

Here’s  a selection of Practical Wanderlust's list of things to do in Louisville during the autumn, but you can read the full article here.

Just like California has Napa Valley, Kentucky has The Bourbon Trail. Bourbon is Kentucky’s proudest creation. The secret behind Kentucky bourbon is the sweet limestone filtered water which flows naturally through the state. Bourbon distilleries which rely on this sweet natural water source are sprinkled throughout central Kentucky, all within a beautiful 2-hour drive of Louisville.

Their favourite bourbon distilleries are Woodford Reserve and Maker’s Mark. There are also a few distilleries in Louisville itself, but the gorgeous countryside makes the drive well worth it! On your way to each distillery, you’ll drive past picturesque horse farms and beautiful forests of brightly coloured fall foliage. You can also opt to book a tour with Louisville based Mint Julep Tours who will take care of the planning (and most importantly, the driving) for you. Visiting Bourbon Distilleries is the best way to see the amazing pastoral countryside of Kentucky!

If you’ve ever watched a TV show about the most haunted places in the world, you’ve probably heard of the Waverly Hills Sanitorium. The old tuberculosis Sanitorium was filled to the brim with the sick and dying during the first half of the 1900s. There were so many dead that the Sanitorium built an infamous body chute to send the deceased directly down the hill to the crematorium. Today, the building itself is spooky enough to give anyone chills. But during the Halloween season, Waverly Hills turns itself into a thrilling Haunted House. There are said to be several ghosts still haunting the echoing halls. Creepy!

Everyone knows that Louisville is the home of the Kentucky Derby, the world’s most famous horse race. But the Derby is in May and this is a list of stuff to do around Halloween in Louisville. But you can still enjoy Mint Juleps, the thunder of hooves, the roaring crowd and the fanciest hats you’ll ever see throughout the fall at Churchill Down’s Fall Meets! Churchill Downs hosts exciting races all season long, check the Churchill Downs Calendar for full details.

Go on a Haunted Walking Tour of Old Louisville

Attend One of Louisville’s Fall Festivals

Louisville LOVES its festivals and fall is no different! There are so many autumn events in Louisville to take part in - all celebrating things Louisville loves: food, drink, culture and the arts.

I can’t tell you how incredibly magical it is to take a glittering candle-lit walk through thousands of impeccably carved pumpkins, all built together to form larger than life works of art. The Jack O’Lantern Spectacular in Iroquois Park is hands down the most incredible and unique Halloween event in Louisville – do NOT miss it! Local Tip: Arrive a little before dark to beat the queues.

Nestled among Louisville’s Highlands neighbourhood is a beautiful, enormous old park called Cherokee Park. Winding throughout the park are well-maintained trails which criss-cross the main roads through the park and pass through dense forests and luscious hills. It’s a fantastic park for a scenic hike (or drive) and a picnic in the crisp fall weather. Take your leaf-crunching shoes with you for the most satisfying walk possible.

Get Scared at the Best Haunted Houses in Louisville

There are a huge amount of Haunted Houses in Louisville annually, a fact that is directly tied to the thriving local theater scene. Actors love a chance to douse themselves in fake blood and chase after terrified guests while wielding chainsaws. If you want some really convincingly scary Haunted Houses, Louisville is the spot – but prepare to be terrified.

See the Lights at Halloween on Hillcrest

There are certain neighbourhoods that get REALLY into Christmas light displays? Well, that’s how Halloween in Louisville is. Most of Louisville goes all out for Halloween, but one street in particular celebrates the holiday like no one else. Hillcrest Avenue is the best place to see amazing Halloween light displays, complete with graveyards, interactive displays, and a zombified Selfie Booth. A walk down Halloween on Hillcrest in October after dark is guaranteed to get you in the Halloween spirit!