As Mississippi celebrates 200 years of statehood, the Mississippi Blues Trail reached a major milestone with its 200th marker, “Rocket 88,” which celebrates what many credit as the first rock ‘n’ roll recording. 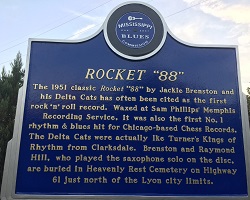 “The Mississippi Blues Trail tracks the inspiration, creation and influence of blues music throughout Mississippi and to locations around the world,” said Visit Mississippi Director Craig Ray. “Our 200th marker recognises how blues music led to rock ‘n’ roll and solidifies the importance of Mississippi as the Birthplace of America’s Music as we celebrate our state’s bicentennial year.”

“Rocket 88” shot to No. 1 on the Billboard R&B chart in 1951, credited to Jackie Brenston and his Delta Cats and recorded in Memphis by future Sun Records founder Sam Phillips. Although Brenston wrote and sang lead on the track, the “Delta Cats” band was actually 19-year-old Ike Turner and his Kings of Rhythm band, who rehearsed at the Riverside Hotel in Clarksdale, Mississippi. Brenston’s brief ride to stardom was soon eclipsed by bandleader Turner. He returned to his role backing Turner on tenor saxophone after recording a few additional sides in the early ‘50s.

Many music writers acknowledge the song’s importance in the development of rock ‘n’ roll music, with several considering it the first rock ‘n’ roll record. Driven by a propulsive rhythm, “Rocket 88” features a wild saxophone solo and a unique distorted guitar sound, the result of a guitar amplifier damaged on the drive to Memphis, which would become a trademark of later rock ‘n’ roll songs.

Brenston and bandmate Raymond Hill, who played the saxophone solo on “Rocket 88,” are buried in Heavenly Rest Cemetery on Highway 61 just north of the Lyon city limits.