The Tennessee Department of Tourist Development today released its 2018 Official Tennessee Vacation Guide. The cover features an inspiring and artistic rendering of Dr. Martin Luther King Jr. along with the Lorraine Motel, the site of his assassination, to commemorate the year-long celebrations for MLK50 and to celebrate the life and legacy of Dr. King. 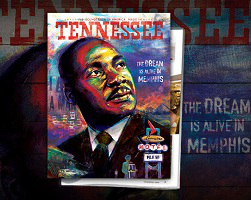 Fifty years ago, Dr. King was in Memphis, where he marched with striking sanitation workers who demanded safer working conditions and fair pay, and carried signs declaring, “I AM A MAN,” which are featured prominently on the cover. While in Memphis, King delivered his famous “I’ve Been to the Mountaintop” speech.

“Dr. King’s legacy continues to inspire our nation and the world as his dream lives on in Memphis,” said Commissioner Kevin Triplett, Tennessee Department of Tourist Development. “Fifty years is a poignant time to honour that legacy while celebrating those who have used that inspiration to make a difference. The world-class National Civil Rights Museum commemorates the 50th anniversary while telling the full story.”

“The dream also lives on in The Orpheum, Beale Street, Clayborn Temple, Stax Museum of American Soul Music and iconic Memphis murals including ‘I Am a Man,’ ‘Memphis Upstanders’ and ‘The Sound of Music.’ All of those were catalysts for growth,” said Triplett. “The National Civil Rights Museum helped bring resurgence to a neighbourhood that has seen people and businesses moving in. That kind of excitement is happening all over Memphis. From the Pyramid and the Pinch District, Midtown, Shelby Farms, to the tremendous development in Whitehaven around Graceland. Through all of that and more, visitors can embrace the home of the blues and the birthplace of rock ‘n’ roll and enjoy some of the best barbecue in the country in a vibrant city.”

The Tennessee Vacation Guide also spotlights other Civil Rights sites across the state, including Green McAdoo Cultural Center in Clinton and Woolworth on 5th in Nashville.

Additional highlights include What’s New across the state like Anakeesta Aerial Adventure Park in Gatlinburg and the 2018 opening of the Tennessee State Museum in Nashville, as well as milestones like Tennessee Theatre’s 90th Anniversary in Knoxville. The guide highlights Tennessee’s music with spotlights on Graceland and Elvis Presley’s Memphis, the Birthplace of Country Music Museum in Bristol, Songbirds Guitar Museum, Grand Ole Opry and Ryman Auditorium. There are also recommendations from Tennessee celebrities including music artists Kelsea Ballerini, Drew Holcomb, Kane Brown, Old Crow Medicine Show and Valerie June along with Nashville Predator P.K. Subban and pitmaster Larry Proffitt.

Tennessee’s scenic beauty, creative spirit, unique experiences, culinary excellence and history are all highlighted in the guide, as well as The Discover Tennessee Trails & Byways and the Tennessee Whiskey Trail. Noted writers profile the places, people and events that attract more than 110-million visitors to Tennessee each year. Annual events, regional overviews, maps and destination listings round out the content featured in the guide.

The 2018 Holiday Guide is available online or email tennessee@deep-south-usa.com to request your copy.