The Rolling Stones Exhibit to make final stop in Nashville!

The Rolling Stones Exhibit will make its final U.S. stop in Nashville, Tennessee at the Musicians Hall of Fame and Museum starting on 29th March. 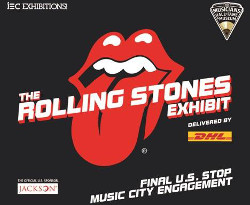 The Music City engagement follows The Rolling Stones Exhibit’s global premiere in London, its star-studded U.S. premiere in NYC and limited engagement stops in Chicago and Las Vegas, all of which garnered rave reviews and drew huge crowds of music, art and fashion lovers. The Rolling Stones Exhibit is the largest touring experience of its kind ever to be staged, and the first time in history that the  most influential rock 'n' roll band in the world has personally unlocked their vast private archive exploring the very beginning of their history to the Stones’ superstardom of today, bringing more than 500 rare items from the past 54 years.

Advance public ticket sales will begin Wednesday 14th February, available online at www.stonesexhibit.com. The Rolling Stones Exhibit will be staged in the Musicians Hall of Fame and Museum, which is located in the Historic Nashville Municipal Auditorium in downtown Nashville (401 Gay Street Nashville TN 37219).

“An exhibit that highlights the extraordinary career of one of the greatest rock ‘n’ roll bands in history belongs in Music City,” said Butch Spyridon, president and CEO, Nashville Convention & Visitors Corp. “The Musicians Hall of Fame is the perfect location, and residents and visitors alike are in for a special music experience.”

“The Rolling Stones Exhibit is a once-in-a-lifetime, immersive experience that tells the story of the most influential rock band in the world,” said Joe Chambers, Founder and CEO of the Musicians Hall of Fame and Museum. “We’re all in for a rare treat. Hosting The Rolling Stones Exhibit here at the Musicians Hall of Fame and Museum and pairing it with our museum that celebrates the achievements of all musicians around the globe establishes a can’t miss destination worth travelling from anywhere for music fans.”

“The Nashville Convention & Visitors Corporation is proud to have played a key role in bringing this unrivalled and immersive Rolling Stones experience to Nashville,” said Beth S. Courtney, NCVC board chair. “We’ve worked for two years to bring The Rolling Stones Exhibit to Nashville, and it will be well worth the effort. After achieving smash hit status in New York, Chicago, and Las Vegas, The Rolling Stones deserve a proper U.S. sendoff and no one will do it better than Music City.”

After opening, the exhibit will continue in Nashville into the Summer. As the exhibit wraps up in Las Vegas and heads Nashville’s way, prepare for more information and exciting updates about The Rolling Stones Exhibit’s final U.S. engagement in Music City.

ABOUT THE ROLLING STONES EXHIBIT

The Rolling Stones Exhibit tells the story of the most influential rock ‘n’ roll band in history, allowing visitors to experience first- hand their incredible journey from early days living together in a tiny flat to headlining the biggest stages in the world. The Rolling Stones Exhibit continues the Stones’ proud tradition of groundbreaking innovation combined with the highest production values.

Originated and produced by Australian-based iEC Exhibitions! with the full participation of Mick, Keith, Charlie and Ronnie, and curated by New York native Ileen Gallagher, this highly immersive and interactive exhibition explores the Stones’ extraordinary career featuring over 500 rare and original items from their archive.

From their most cherished instruments, onstage and offstage clothes, valuable works of art and handwritten lyric books to personal diaries, recordings, unseen film and photos, a screening cinema and interactive recording studio that all culminate in an exciting and powerful backstage-to-onstage 3D concert experience.

“We've thought about this for quite a long time but we wanted it to be just right and on a large scale,” said Mick. “It’s not like walking into a museum. It’s an event, an experience. It’s about a sense of The Rolling Stones – it’s something we want people to go away talking about it.”

“While this is about The Rolling Stones, it's not necessarily only just about us,” said Keith. “It’s also about all the paraphernalia and technology associated with a group like us, and it’s this, as well as the instruments that have passed through our hands over the years, that should make the exhibition unforgettable.”

Over the past 50 years, The Rolling Stones became, and have remained, one of the most culturally important acts in history. From the daring white dress worn by Mick Jagger in 1969, to the seminal Sticky Fingers (1971) album cover to their iconic tongue and lips logo, up to their chart-topping latest album Blue and Lonesome released in December 2016, The Rolling Stones have continued to break the boundaries of cultural norms throughout their incredible career.

The Rolling Stones Exhibit gives visitors a look back at the high points of the band’s career through a new film, with a high-octane soundtrack. It then steps back into the early days, to an amazing recreation of the Edith Grove flat that Mick, Keith and Brian shared in 1962. The flat was located just off the King’s Road in London’s Chelsea neighbourhood.

“The Rolling Stones Exhibit is a celebration and thematic exploration of the creative life of a band that has managed both to stay current and stay true to its artistic vision for more than half a century,” said Ileen Gallagher, curator.

“This was such a unique opportunity to collaborate with the band and get their insights into the project,” continues Gallagher. “The quotes on the wall and all of the text in the exhibition is in the voice of the band or people who work very closely with them. You’re actually having the band tell you what happened at the time.”

There is a recreation of a Stones’ recording studio complete with their original instruments, plus a “backstage” area to give fans a sense of what it truly feels like just before the band heads out on stage. A guitar gallery brings together examples of some of Keith, Ronnie and Mick’s prized instruments, including a rosewood Fender Telecaster and a Maton that Keith played on Let It Bleed, which famously disintegrated as he reached the final notes of ‘Gimme Shelter.’

Other unique items include the cassette player on which Keith famously sketched out the idea for ‘(I Can’t Get No) Satisfaction,’ just before falling asleep in a Florida motel room, Mick’s lyric book which features the hand written words for ‘Miss You,’ ‘Hey Negrita’ and ‘Worried About You,’ Keith’s 1963 diary, and the toy drum kit that Charlie used in the recording of ‘Street Fighting Man.’

The Rolling Stones officially opened The Rolling Stones Exhibit, delivered by DHL, on 5th April, 2016 at London’s Saatchi Gallery and played through 4th September, 2016. Giving it a four-star review, The Daily Telegraph called it “The most magnificent multi-sensory barrage of Stones 'stuff' you’re ever likely to encounter.” The Guardian exclaimed it as “genuinely jaw-dropping” with London’s Daily Mail adding that it is “The most comprehensive and immersive insight into the band's fascinating 50-year history.”

Visit www.stonesexhibit.com for more information on its Nashville stop.