Today is associated with huge firework displays, parades, barbecues and picnics, family reunions and sports games. It's a great excuse to go all out and celebrate what makes the United States the United States! If however you haven't got to America this year to join in their 4th July celebrations, here's a list of celebrations right here in London. 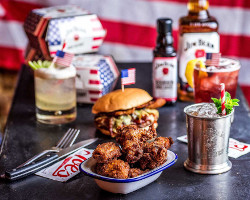 Today, the 4th July, the Americans will come together to mark & celebrate Independence Day - the birth of their nation and the biggest holiday across the pond. Now a federal holiday today marks when the US won independence from the British Empire after the Revolutionary War and commemorates the adoption of the Declaration of Independence 242 years ago on July 4, 1776. It's historically important for Americans but it has also become a huge holiday celebration with parties and events across the country in every state.

The day is commonly associated with huge firework displays, parades, barbecues and picnics, family reunions and sports games. It's a great excuse to go all out and celebrate what makes the United States the United States! If however you haven't got to America this year to join in their 4th July celebrations, here's a list of celebrations right here in London:

Last Days of Shoreditch is hosting a huge 4th of July bash with French’s and Frank’s RedHot sauces, with everything from beer pong and cheerleaders to mustard ice cream. There will also be games of cornhole, foosball, a 6ft Frank’s RedHot sauce fountain, a chicken wing-eating competition and live DJs. The usual suspects – Cheeky Burgers, Mac to the Future and Smokey Tails – will also be serving up buffalo wings, burgers and things oozing with either RedHot sauce or French’s mustard.

Covent Garden's Balthazar restaurant originally opened its doors in New York in 1997, and the London branch is honouring its Yankee roots this Independence Day by transforming its Boulangerie into an authentic ’American Pie Shop’. Pick up pies, pie your mates by joining in the restaurant's ‘pie face game’ and see a special guest appearance from New York DJ Chloe Caillet.​ ​

Chelsea’s Italian-American restaurant, GOAT, will be dressing up in red, white and blue to celebrate America on this 4th of July with a special cocktail masterclass in the DRINK bar. You’ll be able to try your hand at shaking and making all sorts of American drinks from mint juleps to Cosmopolitans. When you’ve shaken it all off, head to the dance floor where the DJ will be spinning American classics. Entry is free for all, but Americans get a free drink on arrival (ID required)!

The British Museum of Food’s founders Bompas & Parr present this exhibition dedicated to all things ice cream. See memorabilia from the world’s largest collection of ice cream paraphernalia, try scoops made with intriguing flavours of bygone era like candied fruit, an all-day-breakfast flavour and an eighteenth-century daffodil recipe, taste a glow-in-the-dark concoction in a futuristic luminescent cave and stand in a cloud of vanilla-flavoured fog and breathe it in.

Celebrate Independence Day at Roadhouse, Covent Garden, as the bar hosts its best ever American-themed Rockaoke special. Once the Happy Hour drinks (5.30pm-10pm) have loosened up those vocal chords, take to the Roadhouse stage with live bands who will be playing classic American hits. There will also be 50% off burgers, American-themed decorations and great hot dog and cocktail specials. Free entry and shot before 12am. The party continues till 3am.

Mondrian London has a lot going on for Independence Day, but it’s the 4th of July party at Rumpus Room that we’ve got our eye on. The hotel’s 12th-floor rooftop bar, with its panoramic views across the Thames, will host an all-American party – complete with American flags and balloons – in association with Maker’s Mark bourbon whisky. There will be beer pong, retro, USA-themed cocktails from Maker’s Mark and Jim Beam and a live band performing cult classics and contemporary tunes from across the pond. Alternatively, at Sea Containers restaurant, you’ll find a special menu of classic American dishes from 4-8 July.

Big Easy’s annual rib-eating contest is a huge fun, filling and messy way to celebrate Independence Day. For the 27th year running, Big Easy will be hosting the contest at each of its three London locations, in Canary Wharf, King’s Road Chelsea and Covent Garden. Ten participants at each location will have 30 minutes to devour as many ribs as they can and whoever puts away the most will be declared this year’s champion. But don’t worry, you don’t have to participate, you can just sip red, white and blue margaritas and cheer on the chompers. Email ribeating@bigeasy.co.uk to enter.

Find your local branch at bigeasy.co.uk

Fill your Independence Day with nostalgia for Hollywood musicals at this outdoor screening of La-La-Land. Grab one of the on-site deckchairs and a blanket then nab some snacks from one of the canalside food vendors. You'll have'City of Stars' in your head for the whole tube ride home.

Whisky 101 at The Gallery, West Hampstead

Celebrations spill over into 5th July at The Gallery in West Hampstead. The bar and restaurant will be hosting a banquet of food, beer and bourbon from America’s South with their Whisky 101 event on 5th July. As well as a range of whiskies from Kentucky distiller, Heaven Hill, there will be pulled pork sliders, crispy fried chicken and refreshing beers from London-based brewers FourPure. The ambassadors for Heaven Hill and FourPure will also be on hand to share their knowledge of bourbon and beer making. American rock ‘n’ roll, funk and soul DJs will provide the soundtrack to the evening. Tickets are £15 including the food and one cocktail and beer. For reservations, email info@ilovethegallery.com.

Celebrate Independence Day at M Victoria St with food, feasting, fireworks and a bucking bronco! Chow down on the likes of salt-aged USDA Prime T-Bone steak (from £45) and sip your way through a special Bulleit Bourbon cocktail menu (from £8.50). Before all that though, you may like to grab a Stetson and try your luck with the bucking-bronco in M Bar.