Mississippi's writers include the likes of William Faulkner, Eudora Welty and Richard Wright, and now Mississippi’s literary history will soon be preserved and celebrated with a series of historical markers throughout the state designating the Mississippi Writers Trail. 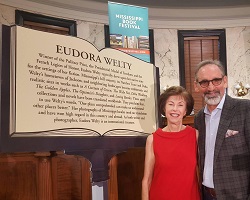 The first chapter of the Mississippi Writers Trail began with the unveiling of two inaugural markers at a special ceremony opening the 2018 Mississippi Book Festival during August in Jackson.

“The Mississippi Writers Trail not only celebrates and immortalises the state’s vast contributions to the literary world, but also draws so many to our state who are wanting to see where some of the most influential American writers were inspired to write their masterpieces,” said Visit Mississippi Director Craig Ray. “There is not a more perfect time to launch the trail and honor the state’s literary legacy than during the Mississippi Book Festival.”

The two markers commemorating the launch of the Mississippi Writers Trail will honour author Eudora Welty and novelist Jesmyn Ward, reflecting Mississippians’ past and present contributions to the literary world. The unveiling of the Welty marker at its permanent location at the Eudora Welty House in Jackson took place this week. The date and location of the unveiling of the Ward marker will be determined at a later date.

Additional markers will be placed across the state in the coming years, as funding permits. Writers honoured with a trail marker and the order in which they will be placed will be determined based on scholar recommendations.

For more information, refer to the Mississippi Arts Commission, http://www.arts.ms.gov/