The first thing you notice and feel when you step through the doors of Earnestine & Hazel’s sundry-cum-nightclub on South Main Street in a tawny arts district in Memphis, Tennessee, is that nothing – nothing – in this bar is even remotely new. 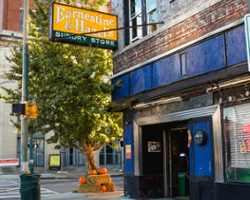 Everything is weathered like paint peeling off a hundred-year-old cotton gin. Nicotine has stained anything might have once been white. You can’t see through the windows because they’re smudged to the point of looking like they’ve been sanded. A red leather sofa is held together with almost matching red leather tape and the black bar stool padding is held together with black tape. And no one who frequents this club famous for its upstairs brothel would ever want a thing to change, including the ghosts that apparently reside within the walls.

Earnestine & Hazel’s is one of those Memphis bars that has a history so steeped in mystery and lore that there’s actually no telling what is fact and what is fiction. From tales of Ray Charles shooting up heroin upstairs with prostitutes to the brown stain in the bathtub that is thought to be the blood of a murdered pimp, to a young woman’s spirit who plays the jukebox to this bar being the inspiration for the Rolling Stones’ “Honky Tonk Woman,” half of the fun of Earnestine & Hazel’s is getting caught up in the fever of its urban legends. 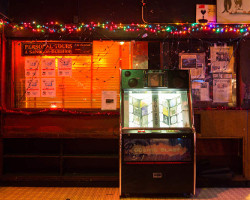 A few things are fact: It was a pharmacy and drug-making facility first opened by Memphian and Coppertone Suntan Lotion mogul Abe Plough sometime around 1930. It’s reported that when he hit the big time and left Memphis, he gave the place to sisters Earnestine and Hazel Mitchell, who had rented the upstairs from him to operate their beauty shop. By the 1950s, they turned it into a café with rent-by-the-hour accommodations upstairs, which then became a brothel and remained one for many decades.

While the upstairs remains much like the original brothel but has added an intimate bar that serves hard liquor drinks, the main attractions downstairs (beer only) are the jukebox and the now-world-famous Soul Burger. It’s the only food item on the menu. Deconstructed, it’s just bread, meat, sweated onions, pickles, mustard and mayonnaise. Once they put all that together on the ancient griddle with their special sauce, though, it becomes as beautiful and mysterious as the stories that emanate from this uniquely Memphis icon.