The Memphis food scene may be much better known for its barbecue and Southern soul food, but it’s also a hub of ethnic cuisine. 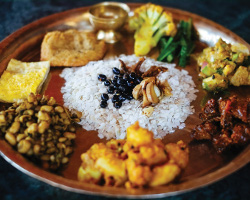 Due to the fact that, because of its affordability and other factors, it’s home to many immigrants and refugees. With few topics in the United States as controversial right now as immigration and refugees entering the country, the subject is palpably front and center with one new restaurant’s founder and CEO Sabine Langer, an immigrant from Switzerland herself. But the controversy seems soothed a notch by the cuisine three refugee chefs are preparing at her Global Café, a recent epicurean addition to Crosstown Concourse in Memphis, the million-plus-square-foot revamped Sears and Roebuck distribution center that was built in 1927 and is now a “vertical urban village” that’s home to restaurants, bars, shops, a performing arts center, grocery markets, bakeries, art galleries, a brewery, a gymnasium, a high school, and more than 40 other businesses.

Langer, who moved to Southern California in the early 2000s but has been in Memphis five years now, is an unlikely restaurateur; she’s a vegan who can’t stand to even boil an egg. But when she got involved in a nearby neighbourhood’s refugee community, she saw that food seemed a common theme that brought – and could bring more – people from different cultures together in Memphis. Moreover, it could provide much-needed income and economic empowerment for many who were already known for the delicious food they prepared.

After more than a year of planning which countries’ cuisines would be represented, based on the food itself and the available cooks in Memphis, Global Café opened in August 2018 in an industrial chic but cozy spot at Crosstown. In the three open-air kitchen bays where diners can watch the cooking taking place, chef Fayha Sakkan represents Syria; chef Ibti Salih cooks the cuisine of her home country of Sudan, and chef Indra Sunuwar dishes up her already-famous Mo Mo dumplings and other delicacies from her native Nepal. The restaurant’s manager and bartender is Juan Viramontes, a chef who emigrated from Mexico to California as a child and who moved to Memphis specifically to manage Global Café. Other employees are from Zambia, Somalia and Bhutan.

For true foodies, the menu at Global Café is not overly exotic, with dishes like hummus, samosas, kabobs and stuffed grape leaves. But as the chefs grind spices, chop peppers, puree soups, stir large pots of stews and mix ingredients native to their homelands and sometimes hard to find in Memphis, it’s obvious that the food is fresh, interesting and very authentic. It’s also inexpensive with no item on the menu more than $10.

“We were intent on making this very affordable to everyone,” Langer says. “We want people from the neighbourhood to eat here, people visiting Church Health here at Crosstown, and the other many immigrants and refugees who can get a meal like something they would have at home. It’s really a place for everyone.”