Sleeping off the beaten track in Mississippi

You’ll see them sooner or later: signs promising Gas, Food & Lodging along the highway. The chain hotels behind those off-ramps surely offer an comfortable and affordable night’s sleep, but lack dearly in local charm. Which is a shame, because just down the road there are true gems to discover. In this ongoing series, we introduce you to some great off-the-beaten-track accommodations in Mississippi. 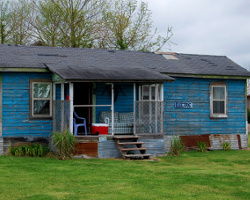 Mississippi is known for at least three things: music, history and ridiculously good barbecue and soul food. Clarksdale has them all. This town breathes blues from all sides and plays a significant part within the Mississippi Blues Trail, a monster scenic drive along more than 200 places where the blues has left its mark in one way or another. Clarksdale adds to that with vibrant venues where you can experience the blues live – and then some. Just turn up at the real-deal juke joint Red’s Lounge or Morgan Freeman’s Ground Zero Blues Club and let local talent set your night on fire.

After a night of blues, falling face-down on a sterile hotel bed along the highway is one option, as is loading a plastic plate with tepid scrambled eggs, half a bagel and some fat-free yoghurt at the breakfast buffet the next morning. But why would you? Waking up is infinitely better in the restyled vintage rooms and apartments above Ground Zero, if only because your bed is merely a flight of stairs away when you’re done shaking your tailfeather at the club.

At the Delta Bohemian Guest House three blocks down from Ground Zero, you and up to three friends could even have a two-storey wooden house to yourself – with ice-cold beer waiting for you on arrival. Want impeccable service during your stay? The neighbouring bed & breakfast Clarksdale White House is a fantastic alternative, with their signature Southern breakfast as a mouth-watering feature.

For maximum Southern vibes, you can check in at the Shack Up Inn on the outskirts of Clarksdale. Its management has collected an impressive array of sharecropper shacks, trailers and cotton gins from around the state and rebuilt them in a one-of-a-kind resort on the grounds of the former Hopson Plantation. Although the accommodations offer modern amenities like TV, kitchenettes and Wi-Fi, the Ritz it ain’t. And you’ll be happy that it isn’t, while nursing a cold one on your wooden porch in the irresistable no-man’s land between rust and rustic that calls itself a B&B – Breakfast & Beer, that is.

Sound good? For more info, email us at mississippi@deep-south-usa.com