The Land Rover Kentucky Three-Day Event takes place every April in Lexington, Kentucky, bringing tens of thousands of visitors from around the globe to the Kentucky Horse Park. 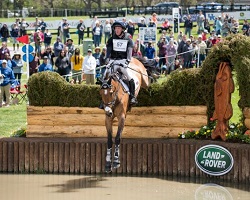 Known to fans as “The Best Weekend All Year” the longstanding Kentucky Three-Day Event offers something for everyone - it has the highest-level of equestrian competitors with the thrills of the sport’s three phases of competition including dressage, cross-country and show-jumping. There’s also course walks with Olympic veterans, breed demonstrations, tailgating and even some glamping. It takes 2,000 volunteers working rain or shine to put this world-class event on!

The Land Rover Kentucky Three-Day Event has recently received the new Five Star status from the Fédération Equestre Internationale (FEI), the international governing body of equestrian sport. Since 1998, the event had been a Four Star event but the new Five Star designation took effect on 1st January 2019 and makes Land Rover Kentucky one of only six annual Five Star three-day events in the world. Last year also marked the event’s 40th anniversary.

There’s no other event like the Land Rover Kentucky Three-Day Event in the United States. This event is a qualifier for the Olympic Games, World Championships and the World Equestrian Games – a competition of the highest level on the international stage.

The world’s top Eventing riders head to Kentucky each spring to compete. LRK3DE fans get to experience the riding of incredible athletes like Oliver Townend (GBR) who is currently the No. 1-ranked Eventer in the world and who won the 2018 Event. And Germany’s Michael Jung, now ranked No. 4 in the world and is the first Eventing rider to hold the Olympic, World and European titles simultaneously. Jung is Three-Day Eventing’s most decorated rider ever! He competed – and won – the Kentucky event a record three years in a row (2015, 2016, 2017) all on the same horse, Fischerrocana FST. Jung is also one of only two riders to win the $350,000 Rolex Grand Slam of Eventing, which is awarded to any rider who wins the Land Rover Kentucky, Mitsubishi Motors Badminton and Land Rover Burghley Four-Star Events in succession.

The world-renowned event has seen nearly 100% growth in spectators since 2013. In 2018, 80,000+ spectators representing all 50 states and more than a dozen countries headed to the Bluegrass State specifically for the Kentucky Three-Day Event.

The Land Rover Kentucky Three-Day Event returns to the Kentucky Horse Park 25-28 April.  Tickets to and more information about the event are available at KentuckyThreeDayEvent.com/tickets.