With less than 125 days until 20th July, Huntsville, Alabama is hard at work planning a weeklong celebration of humanities greatest technological achievement - the lunar landing of Apollo 11. 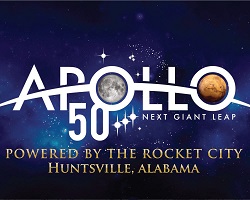 On 16th July 1969 at 9:32 am at NASA’s Launch Pad 39A, Apollo 11’s five F1 engines on Nasa’s Saturn-V AS-506 rocket ignited to slowly lift three Americans and humankind’s dreams aboard the historic mission to the Moon. On the 50th anniversary of Apollo 11, Huntsville will be dancing in the streets, toasting Apollo workers and moonwalkers and leading a rocket launch of thousands around the world as part of its celebration.

Throughout 2019, plans to commemorate the Apollo 11 anniversary events and Alabama’s Bicentennial are underway, highlighted by Panoply 2019’s Alabama Bicentennial and Lunar Landing themes, a Guinness World record attempt at the most simultaneous rocket launches, an Apollo Homecoming Dinner at the U. S. Space & Rocket Center and dancing in the streets on Courthouse Square. The Apollo 11 mission anniversary week in July 2019 also includes a Celebration Car Show and a concert on 20th July - moon landing day!

“There is a good reason Huntsville, Alabama, is known as Rocket City.  As you enter the city, you pass a 363-foot-tall Saturn V rocket that sent man to the moon. That rocket was developed in Huntsville and came out of programs when Dr. Wernher von Braun and his team first started working on America’s space program,” said Grey Brennan, Deputy Director of the Alabama Tourism Department.

“Huntsville is already known around the world for our connections to the U.S. space program and in 2019 we expect to see visitors from across the globe coming to celebrate this historic year with us,” said Judy Ryals, President/CEO of the CVB. “Only in Huntsville can visitors stand under the magnificence of the Saturn V rocket at the U.S. Space & Rocket Center, be surrounded by the history behind one of humankind’s greatest achievements, attend Space Camp® and also see where deep space exploration is heading in the future – the journey to Mars. That is truly an experience you can’t have anywhere else in the world and we look forward to welcoming guests who seek this unique adventure.”

Dr. Deborah Barnhart, USSRC CEO and Executive Director, said “We look forward to welcoming the world to the U.S. Space & Rocket Center this summer. Huntsville is the city that built the rocket that put mankind on the moon, an accomplishment the Rocket Center is honouring with the world premiere of the exhibit “Apollo: When We Went to the Moon,” lunar landing re-enactments in our new world-class INTUITIVE® Planetarium as well as special events throughout the year. We can’t wait to share the story of Huntsville with our visitors and thousands of Space Camp students from the globe.”

A citywide master calendar of events, activities, conferences and other events related to the Apollo 11 50th Anniversary Celebration will be consolidated at the Huntsville/Madison County Convention and Visitors Bureau.