The Mississippi Writers Trail now honours William Faulkner. The latest marker of the new state-wide trail stands in front of Faulkner's Southern home Rowan Oak in the university town of Oxford. The sign was unveiled during a ceremony held on the 10th of October 2019. 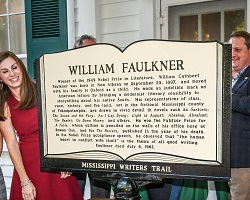 Faulkner’s marker adds volumes to the Mississippi Writers Trail, which has been gaining traction fast since the unveiling of its first honoree in September 2018, Eudora Welty in state capital Jackson. Similar to the wildly popular Mississippi Blues Trail – currently leading to more than 204 historic blues sites and counting – the Mississippi Writers Trail points the way to major American authors, who are either from the Magnolia State or have written there.

William Faulkner (1897-1962) spent the last 32 years of his life at his beloved Rowan Oak, a modest Southern mansion in Oxford which now houses a museum. Here he wrote acclaimed novels like Light In August and Absalom Absalom! – often working from scribbled notes on the walls, that still can be seen in the museum today. Many of Faulkner’s stories are set in the fictional Yoknapatawpha County, intricately based on the real Lafayette County around Oxford. His works are renowned for their ground-breaking style as well as their frank observations on themes like war, racism and community. In 1950, Faulkner was awarded the Nobel Prize for Literature.

Faulkner’s legacy echoes throughout Oxford. After visiting the Rowan Oak museum, literature fans flock to his grave at Oxford Memorial Cemetery to pay their respects and maybe leave him a bottle of whisky. A statue on a bench in Oxford’s picturesque Town Square shows Faulkner with his hat and pipe, watching the hustle and bustle of everyday Mississippi life. A great view, not in the least because of Square Books across the street – one of the most beautiful bookstores in the US.

The Mississippi Writers Trail continues to grow at an impressive pace. Faulkner’s is the third marker this year alone, after Margaret Walker and Elizabeth Spencer were honoured in Jackson and Carrollton respectively. For the coming years there is no shortage of candidates. Tennessee Williams, whose birthplace in Columbus is also a museum, Yazoo City’s Willie Morris and Richard Wright from Natchez, are among Mississippi's many world-class writers. There are also footsteps of many living literary giants to follow in, such as Natasha Trethewey (Gulfport), Greg Iles (Natchez), Donna Tartt (Greenwood) and John Grisham, a long-time resident of Oxford, Mississippi.

For those looking for deeper insights into Mississippi’s impact on world literature, the Mississippi Arts + Entertainment Experience Museum – The MAX – in Meridian is a great place to start. Among others, the state-of-the-art cultural hub offers exhibitions on music, art and Mississippi legends like Jim Henson, the creator of The Muppets who was born in Leland, MS. One of its six galleries is devoted entirely to Mississippi literature, showcasing a constantly evolving list of more than fifty authors and poets.

The Mississippi Writers Trail emerged as a project of the Mississippi Arts Commission, representing leading figures of the state's art and literature. Currently partners also include the one-day Mississippi Book Festival in Jackson, which is visited by thousands of pilgrims each year in August, and the Visit Mississippi Tourist Office.