A plaque celebrating Liverpool and Memphis’s relationship as musical Rock ‘n’ Soul Mates has been unveiled in Mathew Street. Liverpool Mayor Joe Anderson and Kevin Kane, president of Memphis Tourism, officially unveiled the latest link between the two cities, with an identical plaque being placed in world-famous Beale Street in Memphis where blues and rock ‘n’ roll were born. 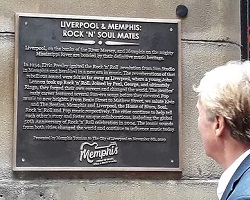 The cities that gave the world two of the greatest and most popular music icons have joined forces and become Rock ‘n’ Soul Mates as part of a transatlantic strategy that will build cultural awareness and encourage destination tourism and business links.

Liverpool and Memphis are cities bonded by a shared history. From the early rock ‘n’ roll of Memphis to the birth of The Beatles, from the cotton plantations of Tennessee to Liverpool’s port there is a deep interconnecting history that is in turn challenging and vibrant. To visit one city is to witness only half of the whole amazing story.

Both Liverpool and Memphis have also explored their rich, cultural and historical elements through great museums such as The Beatles Story, Graceland, The Memphis Rock 'n' Soul Museum, The Slavery Museum and The National Civil Rights Museum but never before in context of each other. 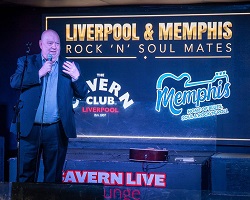 Memphis’s Stax Academy is already in collaborative conversation with Paul McCartney’s LIPA and plans are underway for the creation of many other Rock ‘n’ Soul Mates including Mathew Street & Beale Street, Sun Studio and The Casbah Club and many of the leading hotels, museums and galleries of the two cities.

The joint initiative, forged by the cities of Liverpool and Memphis, hopes to encourage tourists to explore the many links between the cities whose music and history shaped the world - with a little help from The Beatles and Elvis Presley!

For more information on any of the attractions mentioned in this article, email memphis@deep-south-usa.com.