Meet the first family of Bourbon

How about a nice read to amp up your taste for Kentucky bourbon? Along the way you’ll learn about unwavering bourbon-making genes and the undeniable influence of the Beam family, their Christmas parties must be legendary! 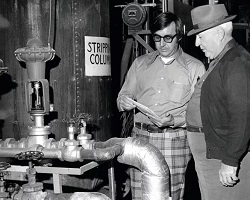 The full article by whiskey specialist Lew Bryson for The Daily Beast tells the baffling story of the Jim Beam Distillery from its humble beginnings in 1795 to present day. The Beam family that produced at least 30 (master) distillers and helped build more than 40 different brands of whiskey – including Maker’s Mark, Bulleit, Four Roses and Heaven Hill.

The Beams truly are the First Family of Bourbon. Jacob Beam – born as Johannes Boehm in Germany – sold his first barrel of Old Jake Beam Sour Mash in 1795. Jacob was a fresh face among more than 2,000 distillers in the state of Kentucky at the time. His whiskey quickly became a local favourite, especially after it changed its name to Old Tub in the 1820’s. The distillery really took off after it moved to Nelson County in 1854 to be closer to the railroad, which gave it national distribution power. By the time Prohibition rolled into town, Old Tub was one of the leading bourbon brands in the USA.

Things weren’t exactly looking up after that disastrous dry spell. When Prohibition was repealed in 1933, then 70-year old master distiller Jim Beam had his entire distillery rebuilt by hand in just 120 days. Moreover, Beam insisted that his first drink in more than a decade was to be made by himself, a celebratory drop that would take another two years to age. His first barrel of Colonel James B. Beam Bourbon rolled out of the rickhouse in 1935 – exactly 85 years ago. And there was much rejoicing.

Whenever you’re in town, a visit to the Jim Beam Distillery in Clermont is always worth your while – if only to pick up some rare limited-release bourbons. Its American Stillhouse is part of the official The Kentucky Bourbon Trail, the state’s famous route connecting 18 signature distilleries in one heady experience. Guided tours at the American Stillhouse are available Monday to Sunday (09:30–15:00 EST).

Real bourbonheads will salivate at the thought of the private distillery tour Behind the Beam (select dates, 10:00-14:00 EST), which includes a guided premium tasting in the historic Beam Home with Fred and Freddie Noe – the great-grandson and great-great-grandson of Jim Beam himself. For the low-low price of USD 225 they’ll even throw in a bourbon-inspired barbeque lunch and a commemorative bottle to take home. Be sure to update your bucket list accordingly.

Sound good? For more info, email us at kentucky@deep-south-usa.com