The Year of Virtual Travel Through Alabama's Natural Wonders

Craving for some outdoor adventure? Alabama have dedicated 2020 “The Alabama Year of Natural Wonders” which launched on Earth Day, 22nd April 2020. This blog item will help you with ideas for an outdoor 2021 holiday! 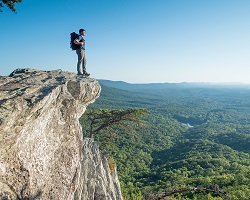 Although ​travel enthusiasts may be​ limited to how they can enjoy Alabama’s natural wonders while on stay-at-home orders, there are still many ways to escape to Sweet Home Alabama.

From hiking, caves, waterfalls, birdwatching, paddling trails and more... as part of the Alabama Year of Natural Wonders, the state tourism department is releasing its 20 for 2020 list of the state’s most magnificent natural wonders. ​Travellers are encouraged to experience these natural wonders, even if only virtually for the near term.

Guests can tour Cathedral Caverns or escape to the pristine beaches on the Gulf… all from the comfort of their couch. ​A new ​webpage​ devoted to national, state and public parks is a great place to start.

“We are looking forward to the days when all travellers can again enjoy the beauty of Sweet Home Alabama in person,” said Lee Sentell, director of the Alabama Tourism Department. “Until then, we hope guests will welcome these virtual experiences that are available from the safety of their home.”

From towering mountain ranges to pristine beaches, natural wonders abound in Alabama. The state's winding rivers and beautiful landscapes are home to such variety it makes it one of the most bio-diverse states in the nation. Here's the 20 for 2020 list of Alabama Natural Wonders to inspire your next trip. Start researching now and when the time is right, grab your travel buddy and embark on a road trip to Sweet Home Alabama:

Walk on some of the most beautiful, sugar-white beaches in the world, created from centuries of white quartz crystal washed down from the Appalachian Mountains and ground into soft, fine, white sand by the Gulf of Mexico.

At the foothills of the Appalachian Mountains you’ll find Mount Cheaha with the most spectacular view. Located in Cleburne County, this is Alabama’s highest natural point at 2,407 feet above sea level.

Here you will see one of the largest stalagmite columns in the world. The appropriately named 45-foot tall, 243-foot wide Goliath at Cathedral Caverns State Park in Marshall County, is just one of the cavern’s many fascinating formations. Others to check out in the area are the ‘frozen waterfall’, the ‘pipe organ’ and the ‘cave bacon’.

Explore America’s Amazon, one of the largest river delta and wetlands in the country and the Mobile River basin, which flows through it, form one of the riches regions in the world for a number of species and habitats. It contains about one-third more than any other state of all the country’s known freshwater fish species as well as more species of mussels, snails, turtles and crawfish.

Besides seeing its countless rock formations such as natural bridges and a 16-inch-wide squeeze known as ‘Fat Man’s Misery’, on nights in May and June in this Franklin County canyon, you can see dismalites, the only bioluminescent insect in North America.

Just outside William Bankhead National Forest in Winston County, you can see the longest natural bridge east of the Rocky Mountains, a rock arch 148-feet across and 60-feet high.

Whether you are a serious birder or a novice, you will enjoy these six birding loops in Baldwin and Mobile counties. The trails, which cover more than 200 miles, wind along the main bird migration corridor that attracts more than four hundred different species of birds.

These flowers, which bloom in May & June along the Cahaba River, the Tallapoosa River and Hatchet Creek, are found in only three states – Alabama, Georgia and South Carolina.

The main room of these Talladega County caverns is longer than a football field, more than 10-stories high and has one of the world’s largest continuing accumulations of onyx-marble stalagmites and stalactites. It’s also filled with history from when Hernando de Soto met Native Americans outside the caverns in 1540 to when the cave was an illegal speakeasy in the 1920s during prohibition.

Located in Rickwood Caverns State Park, this cave features fossilised marine animals embedded in its walls, remnants of a time 260 million years ago when it was part of a prehistoric ocean. Besides fascinating formations, such as the Frozen Castle and the Bridal Column, there is a sunterranean lake featuring endangered blind cave fish.

See the natural wonder that had the biggest impact on Alabama. With an impact 175,000 times greater than the nuclear bomb detonated at Hiroshima, Japan, in 1945, this comet created this natural wonder of Alabama 83 million years ago. It is the 11th largest impact crater in the United States and one of only six above-ground impact crater locations in the world. You can still see remnants of what is called the Wetumpka Impact Crater just off US Highway 231 about 12 miles northeast of Montgomery.

See one of the nation’s longest mountaintop rivers. Almost the entire length of The Little River, in northeast Alabama, flows down the middle of Lookout Mountain with the river creating the spectacular DeSoto Falls and Little River Falls.

The Sipsey Wilderness, 24,922 acres in the heart of the Bankhead National Forest, is a hiker’s paradise. The largest and most popular wilderness area in Alabama, the Sipsey Wilderness features 45 miles of trails that pass so many water cascades that the area is often called the ‘Land of 1000 Waterfalls’.

Even if Vulcan, the largest cast iron state in the world, wasn’t standing atop it, Red Mountain and Park would symbolise Alabama’s largest city. Iron ore not only turned this mountain red but, when mined, created growth in the area from around 3,000 residents in the 1880s to more than 210,000 residents today.

The Gadsden site combines the romantic legend of Noccalula, the young Cherokee maiden who reputedly threw herself to her death into the falls rather than forsake the man she loved for one her father ordered her to marry, and a beautiful waterfall with a gorgeous 90-foot drop.

If you are willing to take this gorgeous and sometimes difficult 6.6 mile hike in northern Jackson County, you can see sinkholes, exposed limestone, a cave and waterfalls.

Located in northwestern Alabama near the town of Double Springs, this 181,230-acre forest contains the Sipsey Wilderness and is known as the ‘land of a thousand waterfalls’. It also has some of the best hiking, hunting, fishing, canoeing and horseback riding in the state.

One of the longest free-flowing rivers in the Southeast, the Cahaba River is also one of the country’s most biologically diverse with more fish species per mile than any other river in the country. The 140-mile river is home to not only the famous Cahaba Lily but an ever-expanding list of newly discovered species of plants and snails.

In addition to enjoying the virtual opportunities available, guests can also download the Alabama Road Trips mobile app ​for more inspiration and assistance in planning their next road trip​. They can also reminisce on their Alabama travel memories by creating a free ​Photo ALbum​.

For more information, email us at alabama@deep-south-usa.com or visit: ​www.Alabama.Travel​