In the 1960 Summer Olympics in Rome, a young Muhammad Ali, then called Cassius Clay, defeated three-time European boxing champion Zbigniew Pietrzykowski and returned to his hometown of Louisville, Kentucky with a Gold Medal. 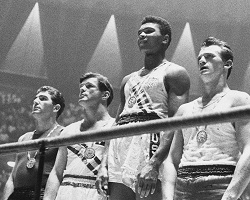 Subsequently the medal disappeared, and its fate has long been the topic of sports media speculation (despite the fact that he received a replacement medal in 1996).

One prevailing theory is that Ali had been turned away from a restaurant because he was black, so he tossed his medal off the Second Street Bridge into the Ohio River. But in interviews, Ali never gave a definitive answer regarding the medal’s location.

This year it would have been 60 years since Muhammad Ali won his Gold Medal and we want to mark this occasion with some great stories about The Champ.

Hear unique insights into the life of a man known simply as “The Greatest” from the woman who knew him best, Muhammad Ali's wife. She peels back the layers to help preserve her late husband’s legacy, as she tells her stories of love and perseverance – not just of the boxer, but of the man. - unforgettableky.com/stories#lonnie-ali

Ali himself was involved in designing the Center and was a regular visitor. Take an incredible journey inside the life and mind of Muhammad Ali, which in February 2020 was added to the list of sites comprising the U.S. Civil Rights Trail, in recognition of Black History Month: unforgettableky.com/stories#donale-e-lassere

Here's a quick tour of the centre:

The two great men met on a number of occasions: 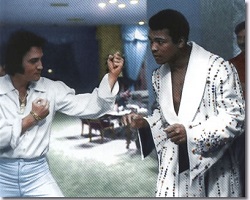 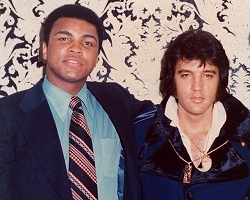 People visit Louisville from around the globe to pay their respects and celebrate the legacy of “The Greatest.” Many plan a trip around Ali Week (June every year) or the Muhammad Ali Humanitarian Awards (September). Louisville Tourist Board have put together a self-guided tour to help visitors trace some of Ali’s “Footsteps of Greatness” around the town he always called home: gotolouisville.com/footsteps-of-greatness.

For more information on any of the above email kentucky@deep-south-usa.com.