Weird And Wonderful Facts About Lexington 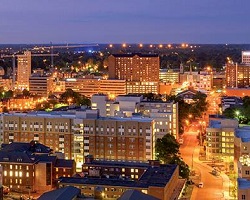 Everyone knows that Lexington is the Horse Capital of the World, home to the Kentucky Horse Park and the Keeneland Race Course, but this is only one side of the city. Thanks to its location on the Kentucky Bourbon Trail, you will also find distilleries and spectacular dining to pair with your cocktails. Although Lexington is Kentucky’s second largest city by population, it boasts a small-town community atmosphere with friendly and approachable people. In Lexington offers a few surprises that make the city special, unique and fascinating.

The 25 Weird and Wonderful Facts about Lexington:

So here you have it - 25 Weird and Wonderful Facts about Lexington!

To find out more about some of the Lexington attractions check out these great sorties and videos:

If you enjoyed the blog all you have to do now is make plans to visit Lexington, but in the meantime why don’t you try one of our favourite recipes, Wallace Station Buttermilk Cornbread, and bring a little Southern inspiration into your kitchen.