Mississippi bites and where to try them

Visitors travel to Mississippi to soak up history and bask in the blues. But they also plan to sample some Southern delights and eat – a lot! From the Tennessee border to the Gulf Coast’s edge, cooks and award-winning chefs are eager to share a taste of their heritage, with an ample helping of Southern hospitality on the side! 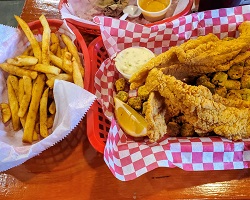 Fried, grilled, blackened, in a taco or covered in crawfish sauce – Mississippi love their catfish.  Not to mention, they love to raise them and lead the country in catfish production, and have done since the late 1980s. Whichever way you like them cooked, here’s where you can eat them in the state:

It’s no shock that biscuits would be on the list.  Natchez, Mississippi has the title of Biscuit Capital of the World.  Here’s a few places to find these fluffy delights and check out our buttermilk biscuit recipe too.

These were once barely even known outside of the state, but it’s now a tried and tested delicacy. It’s seasoned meat encased in cornmeal and then wrapped in a corn husk and simmered, best served with a side of chili and some saltine crackers.

Whether you’re dipping your crackers in it, adding it to a salad or covering some boiled shrimp with it – you just can’t go wrong. This sauce is cousin to Louisiana’s remoulade, spicy and full of garlic. This house sauce of Mississippi was born at the Mayflower Café in Jackson where you can still get it.

FRIED CHICKEN (do you prefer with or without the waffle?)

Fried chicken in the South is best straight out of the cast iron skillet in Grandma’s kitchen. Mississippi’s restaurants are carrying on that beloved family tradition.  And yes, sometimes they like it on top of a hot, buttered waffle with syrup drizzled on top – you HAVE to try it! Here's our fried chicken recipe for you to try at home.

Mississippi is renowned as the Birthplace of the Blues and in the culinary world they’re also known as the birthplace of the blue plate lunch. No matter which food establishment you stop at in Mississippi, you absolutely can never go wrong with a “meat and three.”

These pickles were born when a customer at The Hollywood Café asked for food but the kitchen was practically bare.  The chef dipped dill pickle slices in catfish batter and tossed them into the deep fryer and the tangy, crunchy snack was born. Mississippians also love them dipped in Comeback Sauce!

Perfected in the 1940s at Rosetti’s in Biloxi, the po-boy is a quintessential Mississippi Gulf Coast food.  Whether you get shrimp, oyster, crab or even roast beef, you’ll need to get it “dressed” with lettuce and tomato and “pressed” like a Panini. Trust us….it’s the only way to go!