The Spooky Side of the South

With summer firmly in the rear-view, and the leaves beginning to fall from the trees, it is fast approaching the spookiest time of year. Explore some of the fiendish offerings that can be found across our destinations below.  Here are some spooky holiday ideas to start planning for Halloween 2021. Carry on reading at your own peril but we have a reasonable share of ghosts, voodoo and paranormal stories! 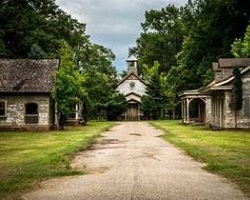 Spectre is perhaps the newest and one of the weirdest ghost towns in America. Home to the "town of Spectre" movie set from director Tim Burton's classic "Big Fish"!

Tim Burton spent six months on Jackson Lake Island in Alabama building the fictional, idyllic town of Spectre for his 2003 movie Big Fish. Afterward, landowners declined to tear it down and now charge $3 to tour what is essentially a ghost town. Only here, rather than a dusty old stretch of saloons, it’s a lush movie set, albeit in a state of decay: Much of it's a facade and falling apart, but the designs are rich in detail with a full main street and surrounding "Enchanted Forest."

There is a ramp to launch your boat and it is also a beautiful place to kayak, fish, canoe or enjoy overnight camping in a serene location. You will find peaceful waters and also access to the Alabama River. Jackson Lake Island has everything you and your family need for some exciting outdoor activities and enjoy a day on the deserted island. Don't be surprised to see a herd of goats roaming the streets. Don’t worry. They're locals! 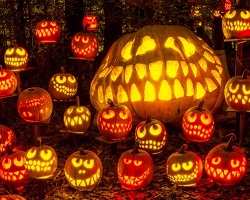 This annual event is a great experience, it's a real Jack O’Lantern Spectacular in Louisville. t's incredibly magical to take a glittering candle-lit walk through thousands of impeccably carved pumpkins, all built together to form larger than life works of art. The Jack O’Lantern Spectacular is located at Iroquois Park and is hands down the most incredible and unique Halloween event in Louisville. 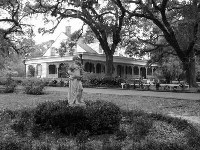 Louisiana has plenty of places where you can get your spook on – read the full article to get some ideas for haunted trips in 2021!

The Myrtles Plantation in St. Francisville is said to be one of the most haunted houses in the country. It all began when Chloe, a slave punished for eavesdropping on the family, found vengeance by baking a poisoned birthday cake. Within hours, three of the main family members were dead. Chloe’s ghost is still reported to haunt the premises. Subsequent owners suffered tragic deaths and murders in the years that followed. The ghosts of these former residents, as well as others passing through, have been documented in photos, featured in TV shows and witnessed by residents and tourists alike. Those brave enough can stay overnight. 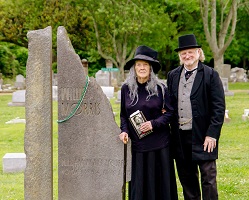 Yazoo City's Glenwood Cemetery, voted the second spookiest cemetery in the US, holds a grave surrounded by chain links known as “The Witch’s Grave”. According to the legend, an old woman lived on the Yazoo River and was caught torturing fishermen who she lured in off the river.  Chased through the swamps where she was half drowned in quicksand, she swore her revenge:  “In 20 years, I will return and burn this town to the ground!”    No one thought much of it at the time, but then came the Fire of 1904 which destroyed over 200 residences and nearly every business in Yazoo City – 324 buildings in total!

Nashville is hosting a raft of virtual Halloween activities this autumn, to enable people to enjoy the festivities from the comfort and safety from their own home. From a virtual El Dia Del Los Muertos party, to a Virtual Haunted Museum experience from the Tennessee State Museum, there is lots to keep people entertained this October.

Located in Adams, Tennessee, the Bell Witch Cave will satisfy fans of the paranormal and macabre. The witch, who once identified herself as Kate Batts, an old neighbour who claimed to have been swindled by John Bell and vowed on her deathbed to haunt him and his descendants, was known to be violent toward the Bell family: beating the members, throwing things and leaving rooms in ruin. Once John Bell died and daughter, Betsy broke off her engagement under the instruction of the witch, the ghost left them in peace for seven years. She returned for a while and then vowed to return in 107 years. It is said she returned in 1935, and now inhabits the cave. Every year throughout October, the Bell Witch Fall Festival has storytellers and performers come to regale the legend along with other historic stories and plays.