This week marks the 65th anniversary of the Montgomery Bus Boycott 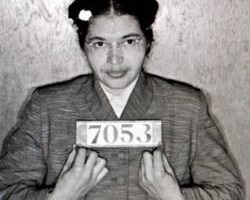 Sixty-five years ago, a civil rights icon’s rise began on the bottom of Page 9 of The Montgomery Advertiser: “Tuskegee native jailed here for ‘overlooking’ bus segregation.” The newspaper had no concept of the history it was covering with the 1st Dec 1955 arrest of 42-year-old seamstress Rosa Louise McCauley Parks. Under Jim Crow laws, the woman had been charged with “ignoring a bus driver who directed her to sit in the rear of the bus.”

The story that’s been told through the decades is that Parks didn’t move because she was was physically tired. She later said that wasn’t the case. She was actually tired of being treated like that. Parks, who sat in the front of the section for Blacks, was one of the Black passengers whom bus driver J.F. Blake told to move to the back of the bus “to equalise the seating.” He could do that because Montgomery gave police powers to bus drivers to enforce segregation. Parks and Blake also had a previous encounter 12 years earlier when he stopped Parks from entering the front of his bus.

Parks was active in both the NAACP as the secretary of the Alabama and Montgomery chapters, and she was part of the Montgomery Improvement Association. But her arrest wasn’t a planned event.  “I got on it to go home,” Parks told the newspaper years later.

On 4th Dec., Parks made the front page of Montgomery Advertiser, the day after thousands of letters were distributed calling on Black riders to refrain from riding city buses. The boycott was just supposed to last a day. Instead, it lasted for more than a year.

By 6th Dec., the boycott took over much of the newspapers front page, with photos and a story describing the church meeting. That issue also covered Parks’ five-minute court appearance, where she was represented by attorneys Fred Gray and Charles Langford. Parks was fined $14 for violating a state segregation law.

On 9th Dec., the newspaper reported that the Rev. Martin Luther King Jr. spoke for boycotters in a meeting with bus officials. What King asked for was “first come-first served” seating, with whites still loading into the front and Black passengers in the rear. He also sought more courtesy from the drivers and the hiring of Black drivers.

No agreement was reached. The boycott didn't end until 20 Dec. 1956, after the U.S. Supreme Court’s ruling outlawed segregation on city buses.

Parks wasn’t the first Black bus rider to get arrested for not leaving a bus seat in Montgomery. Fifteen-year-old Claudette Colvin did the same thing nine months earlier. However, the pregnant teen wasn’t seen by the NAACP as someone a movement could be rallied around.

The desegregation victory for Black bus riders came with a heavy cost for Parks, who lost her job at a department store. Her husband also was fired. The couple moved to Detroit, where Parks built a new life working for U.S. Rep. John Conyers' office. On 24 Oct., 2005, Parks died in Detroit.

In her life, she was honoured with the Martin Luther King Jr. Award and by the NAACP with the Spingarn Medal. In 1996, President Bill Clinton awarded her the Presidential Medal of Freedom, the nation's highest honour for a civilian.

For more information on Montgomery, or to plan your Civil Rights road trip please email alabama@deep-south-usa.com or visit alabama.travel