Get lost on Mississippi's Natchez Trace

Lose the car, we’re going for a walk. You won’t believe where this road will take us. Could be a waterfall, a ghost town, an ancient burial mound or even alligators – the Natchez Trace has it all. 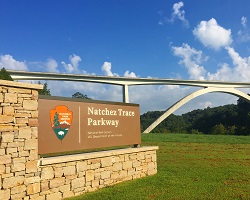 Pack a lunch and find the Natchez Trace Parkway, the 444-mile long scenic byway through Mississippi, Alabama and Tennessee connecting Natchez and Nashville. It roughly follows the Old Natchez Trace, a wilderness road first used by southeastern indigenous tribes such as the Choctaw and Chickasaw.

Their footsteps in the soft soil – and those of the many traders, settlers, preachers, soldiers, slaves and outlaws following in their wake – give the historic Natchez Trace its trademark sunken look, just like this pastoral road in the southern Potkopinu section.

The Natchez Trace National Scenic Trail spreads out over five segments along the Parkway with their own attractions. If you’re only looking for a relaxing hike, bike or horsey ride, we suggest checking out the photogenic Sunken Trace and Cypress Swamp. History buffs should visit the Grand Village of the Natchez Indians, the Mount Locust plantation, the Mississippi ghost town Rocky Springs, and the gravesite of explorer Meriwether Lewis, who died on the Trace in 1809.

The Natchez Parkway Visitor Center near Tupelo is the main welcoming hub. It runs a short documentary and several exhibits about the Natchez Trace, and has National Park Service rangers handy if you’re looking to explore the region further. It’s also the place where you collect your National Park Passport stamp. Happy trails!

For more info on visiting Mississippi, email us at info@deep-south-usa.com