Flying into Lexington’s Bluegrass Airport, one gets a preview of its world class landscape. The grandstand at Keeneland Race Course and the famous red and white barns of Calumet Thoroughbred Farm prove that you are indeed in the “Horse Capital of the World.”

That alone would be enough to entice visitors to the area, but when you factor in more than 200 years of history and a distinct culture combining the graciousness of the Old South, the time-honoured tradition of distilling Bourbon (the United States’ only native spirit), and the folk art and music at the foothills of the mountains, it’s no wonder that Lexington’s Bluegrass Region’s mantra is “Horses, hooch and heritage.” 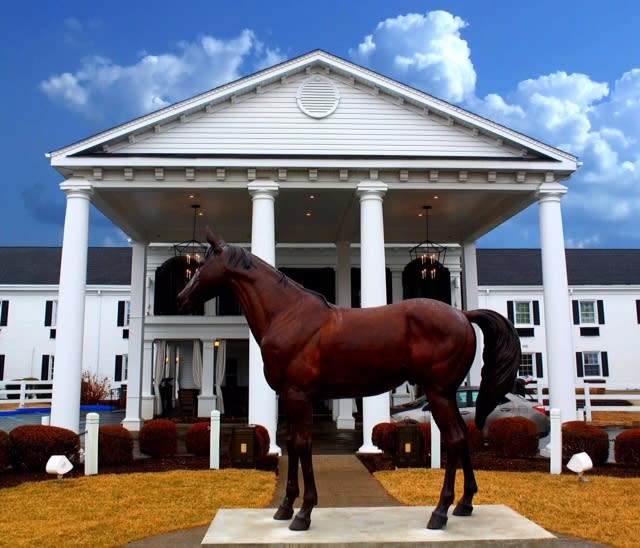 A distinctive, white column historic hotel with an equestrian heritage and an elegant lobby, once an equestrian farm the 1951 Campbell House Hotel building is a member of Historic Hotels of America. They offer award-winning dining and renovated antebellum interiors. The University of Kentucky is within walking distance and 15-minutes of Town Branch Distillery, Keeneland Race Track and Bluegrass Airport. Read more...

Things to do in and around Lexington

The region’s love affair with the horse can be seen everywhere, but it’s the real horses that visitors are hoping to see. Some 450 Thoroughbred and Standardbred farms surround Lexington in all directions, and many are open to the public.

If you are in Lexington in April or October, you can check out the current crop of Thoroughbreds attempting to make racing history during an afternoon at Keeneland Race Course. Listed on the National Register of Historic Places, Keeneland has been hosting spring and fall race meets since its opening in 1936.

For families, the best place to have a true equine experience is the Kentucky Horse Park, a 1,200-acre park dedicated exclusively to the horse.

In addition to the daily activities, the Kentucky Horse Park hosts many seasonal events including polo, steeplechase and the annual Kentucky Three-Day Event, an Olympic level triathlon (dressage, cross country and show jumping) for horses and riders.

If the Bluegrass Region can claim a title other than that of “Horse Capital of the World,” it would be as centre of Bourbon Country, an area which produces 95 percent of the world’s bourbon. With the opening of Alltech’s Town Branch Distillery and two new craft distilleries—Wilderness Trace Distillery and Barrel House Distillery—the Region has among the newest stops on the internationally acclaimed Kentucky Bourbon Trail.

Woodford Reserve Distillery, the oldest and one of the smallest distilleries in Kentucky, sits on picturesque Glenn’s Creek in the rolling horse country of Woodford County. With a distilling tradition dating back to the early 1800s, Woodford Reserve now produces the official bourbon of the Kentucky Derby, Belmont Stakes and England’s Epsom Derby.

Both Wild Turkey Distillery and Four Roses Distillery are in the town of Lawrenceburg. Wild Turkey, occupying the crest of a hill overlooking the Kentucky River, opened in 1855 as a grocery store specialising in tea, coffee and, of course, spirits. The distillery’s most unique feature is the 40-foot column still.

Four Roses, with its Spanish mission style of architecture, may look slightly out of place in the Bluegrass, but its signature bourbons are pure Kentucky.

Buffalo Trace Distillery in Frankfort is the oldest continuously operating distillery in the United States and the first to market single barrel bourbon commercially. The distillery’s setting lies at the intersection of the Kentucky River and the historic trace, down which buffalo, Indians and settlers all travelled.

The Region is also home to an array of locally owned restaurants and bars that highlight the area’s native product through Bourbon-inspired dishes and classic cocktails. Favourites include Beaumont Inn in Harrodsburg, Holly Hill Inn in Midway and Bluegrass Tavern in Lexington.

While nearly everyone knows that Kentucky produces the world’s best bourbon, they may not know that the first commercial vineyard in the United States was planted in Jessamine County, just south of Lexington in the 18th century.

And if you’d like to sample two other regional specialties, make sure to sip on an Ale 8 One, a ginger soda exclusive to the region, while you are exploring The Beer Cheese Trail in Winchester. The famous cheese spread was first created in the 1940s and can be enjoyed at a number of local establishments on the trail today.

Founded in the late 1700s, the Bluegrass Region has an illustrious history and a bevy of distinguished citizens. Many of their homes can still be visited today.

In 1806 a modest two-story brick building on West Main Street in Lexington became home to the Todd family, whose daughter Mary would go on to marry Abraham Lincoln. Today, the Mary Todd Lincoln House has the distinction of being the first house museum in America to honour a First Lady.

Camp Nelson Heritage Park, 400 acres of sprawling countryside above the palisades of the Kentucky River 20 miles south of Lexington, was the location of an important Union quartermaster depot during the Civil War, as well as the site for Kentucky’s largest recruitment and training camp for African-American troops. Nearby the Perryville Battlefield State Historic Site preserves the story of the largest Civil War battle fought on Kentucky soil.

Shaker Village of Pleasant Hill, a half-hour from Lexington in the town of Harrodsburg, is the largest restored Shaker community in the United States and the first site in the country to be designated in its entirety as a National Historic Landmark.

While the Appalachian region of Eastern Kentucky is noted as the birthplace of Bluegrass Music, visitors to the region won’t find any shortage of places to hear it. Of note in Lexington is Woodsongs Old-Time Radio Hour broadcasts live from the historic Lyric Theatre every Monday night, and is carried on NPR and PBS stations around the world. With a format similar to Nashville’s Grand Ole Opry, host Michael Jonathan brings the best in bluegrass and blues, folk and country, rhythm and blues and Rockabilly to his audiences.

Read more on our blog item, weird and wonderful facts about Lexington!