With timeless images from the many books, tv shows and movies set in and inspired by the southern states help to tell the story of plantation life, you can visit and learn about the history of these homes for yourself, dating back to the 1700's delving deep into the roots of the Civil Rights movement.

Visit New Orleans Plantation Country and learn about civil rights battles in Louisiana for the slaves who worked on the plantations, the families that owned them, the tragedy, the reality and the emancipation process post-civil war and really start to understand the rich and often beguiling history of Louisiana and the entire Deep South.

The 106-Mile March for Civil Rights in Louisiana

In 1953, T.J. Jemison, a Baptist minister and one of the founders of the Southern Christian Leadership Conference, led the nation’s first bus boycott against segregated seating in Baton Rouge, Louisiana. His efforts then served as a model for the Montgomery Bus Boycott in Alabama in 1955, regarded as one of the pivotal and best known events in the history of the civil rights struggle. The battle for racial justice pressed on when on 10th August 1967, students from Bogalusa, Louisiana, began a 106-mile march to Baton Rouge to raise awareness of violence against African-Americans nationwide as the civil rights battle continued to gather momentum throughout Louisiana and the Deep South. The march ended 10 days later with a rally on the steps of the Louisiana State Capitol. By the time the marchers reached the Capitol, their numbers had grown from just 25 to over 600. They were protected by over 2,000 National Guardsmen and police officers. The fact that the federal government came to the aid of the marchers demonstrated the seriousness of the situation, but also the level of support from the federal government to enforce new civil rights legislation.

How One Little Girl in New Orleans Inspired a Nation

New Orleans is a landmark site for public school integration for two reasons: a courthouse and its judges, and a brave little girl named Ruby Bridges. Aged 6, Ruby was the only African-American student to attend William Frantz Elementary upon its integration. The history of the civil rights movement in Louisiana is filled with powerful images, few more so than Ruby Bridge being escorted by federal marshals as she faced an angry mob of segregationists, received daily threats to her well-being and intense harassment. Nevertheless, she continued attending the school and many community members, both black and white, stepped in to protect her. Ruby became a symbol of bravery and hope during the nationwide battle for school integration and a powerful figure in the history of the South.

The U.S. Court of Appeals for the 5th Circuit was home to the “Fifth Four” - four judges who contributed to several landmark civil rights decisions regarding school desegregation and because of these judges children like Ruby were able to attend formerly all-white schools and be educated alongside white students.

Inspired by the story of Ruby Bridges and school integration, Norman Rockwell confronted the issue of prejudice head-on with one of the most powerful paintings - "The Problem We All Live With", see below... 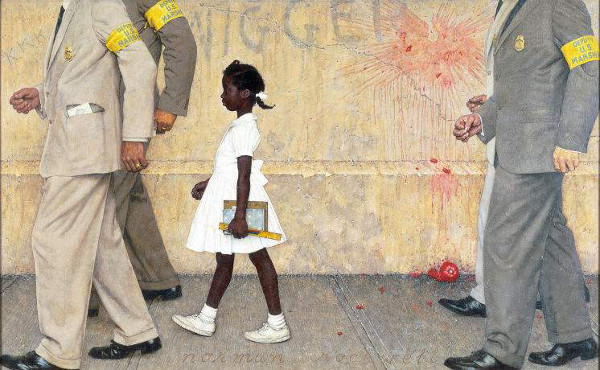