A love of fun is all you need to join Mardi Gras & Carnival season in Louisiana - the greatest free party on Earth! Got a bucket list? If Mardi Gras isn’t already on there, you most definitely need to add it! Where else can you see an entire family dressed as crawfish!?!

The Carnival starts on Twelfth Night and doesn't end until midnight on Fat Tuesday. After each parade, the trees and power lines of Louisiana's most travelled cities are covered with the colourful beads that are thrown during the processions. In the months to come, they will serve as glittering reminders of America's most magical celebration. 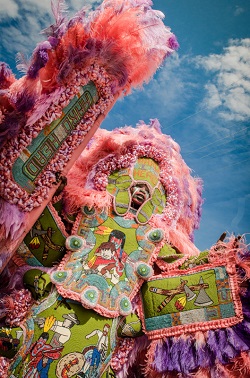 Mardi Gras is all about masked balls, mammoth parades with signature 'throws' and locals adorned in creative, homemade costumes. ‘King Cake’ (a sweet delicious cross between coffee cake and a French pastry) is the quintessential culinary accompaniment to Mardi Gras, with King Cake parties being an everyday thing during Carnival season. And if you want to find out who makes the best one, you can ask 20 people and get 20 different answers - but some will probably include Manny Randazzo's King Cakes and Dorignac's Food Centre in Metairie and Meche's Donut King in Lafayette.

How many parades are there in Louisiana?

Mark Twain once wrote that a traveler " ... has not seen the United States until he has seen Mardi Gras in New Orleans." Mardi Gras in New Orleans has over 60 parades during the season - these include Endymion, Bacchus, Zulu and Rex, the King of Carnival. In recent years, all-women krewes have become popular as well - the Krewe of Muses throws decorative shoes to the crowds while Nyx throws purses! If you're lucky, enough you may see a band of Mardi Gras Indians - these men spend all year sewing the elaborate costumes they'll wear just for one day! If you can't get to a Mardi Gras parade, there is Mardi Gras World open all year in New Orleans. 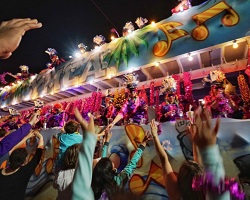 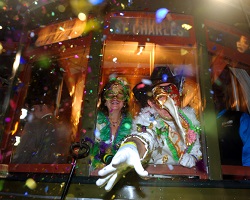 The parade route doesn't end in New Orleans. Baton Rouge's Mardi Gras is a family-friendly event that features decorated floats, marching bands, pet parades and even a krewe that pushes lawn mowers - the Krewe of Yazoo!

Lafayette has two weeks of parades and a unique tradition of naming the King and Queen of the festivities after Evangeline and Gabriel - star-crossed Acadian lovers made famous by poet Henry Wadsworth Longfellow. Down in Houma you'll find sumptuous king cakes and family-friendly parades that start with the Krewe of Hercules. 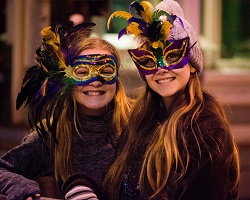 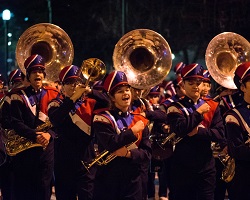 In Church Point, Mamou, Eunice and other small towns outside Lafayette, they celebrate the Courir de Mardi Gras. Merry men arrive on horseback to go from house to house collecting contributions for the communal gumbo.

After New Orleans, Lake Charles has the second largest Mardi Gras celebrations in Louisiana. On Lundi Gras (the Monday before Fat Tuesday) the city's 60 krewes unveil their royal wardrobes at the Royal Gala with music and dancing to follow.

Alexandria also celebrates Mardi Gras in a big way way with 23 krewes taking it to the streets. Shreveport is home to the Krewe of Centaur - one of the largest organisations in the state - and the  Krewe of Highland parade is known for its unique throws including grilled hot dogs and ramen noodles.

Traditionally known as Courir de Mardi Gras, festivities occur in towns throughout central Louisiana’s Cajun Country. Rooted in French medieval history and brought to Louisiana in the 19th century, Courir de Mardi Gras has many rituals that come together in a celebration on Fat Tuesday. It's commonly referred to as "the real Mardi Gras."

Have you also read our 10 things you might not know about Mardi Gras...too?

Ask an expert who's been to Louisiana
Start planning your Deep South USA road trip by contacting one of our Southern specialists.