The Johnny Cash Museum ranks number one as must-see attraction

October 2013 – In the short five months after its grand opening, the latest attraction in Music City – the Johnny Cash Museum, lands at the top of both the Forbes and National Geographic must-see travel destinations lists. Forbes recently released a list of the Top 5 “Must-See” Nashville attractions and put The Johnny Cash Museum as number one.

That acknowledgement was followed the very next day with an unbelievable honour from National Geographic. They published a list of the worldwide top four “Pitch Perfect Museums” (museums dedicated to a single musician) and the Johnny Cash Museum earned the top honour beating the ABBA museum in Stockholm and the Kalakuta museum in Nigeria. “It's a great honour to receive these positive comments and rankings from top publications and organisations,” says founder Bill Miller. “It's a tribute to and validation of Johnny Cash's continuing popularity and our ability to honour him with a top notch venue in an amazing city.”

About the Johnny Cash Museum

“One piece at a time,” The Johnny Cash Museum (JCM) has culminated into an amazing celebration of The Man in Black. JCM celebrated its Grand Opening with a day full of prizes and limited time offers to fans and patrons. Located at 119 Third Avenue South between Demonbreun and Broadway, the museum is en route between the tourist circulated Broadway strip and the Country Music Hall of Fame and Schermerhorn Symphony Center.

Founder, Bill Miller says the  museum is the culmination of a lifelong dream. “I became a Johnny Cash fan at the age of nine in 1969. I collected everything relating to him I could get my hands on. As time went on, I met Johnny many times and we became close friends. Over the years, he and many of his friends and associates contributed to the collection and I scoured the world for important pieces. This museum is our tribute to the greatest man I’ve ever known.”

The JCM will be open every day from 11 AM to 7 PM.  General admission is $14 with discounts for  students, members of the military, etc. On Grand Opening day, May 30th, there were giveaways of CD’s, limited edition Hatch Show Print posters and other free gifts all day long.

"It's indescribable," says Tommy Cash, Johnny’s younger brother. "There's so much to comprehend. I knew all of the memorabilia was somewhere, but to see it all in one building is an awesome experience. I could spend a week in here and probably not see every single thing. It's something that people that come to Nashville from all over the world will want to see."

"It's a really intimate and authentic museum with some lovely personal belongings including handwritten letters and fantastic video footage through the decades" said David Nicholson of the UK Office for Tennessee Tourism. "If you only know a little bit about Johnny Cash it's great and if you're a big fan it's even better – a really great tribute to Johnny Cash."

“An extraordinary collection!” writes Peter Cooper of the Tennessean.

Many never before seen historical documents, letters, awards, costumes and instruments will take the visitor on a three dimensional journey through Johnny Cash’s life with interactive technology provided by the Nashville based Griffin Technologies. The museum, designed by the Temeka Group in collaboration with Bill and Shannon Miller, unites the extensive and acclaimed collection of Bill Miller, longtime friend of Cash’s and founder of the official Johnny Cash website www.JohnnyCash.Com, and pieces from friends, colleagues and family members including his daughters, son and siblings. The collection features the earliest known Johnny Cash letters and documents as well as the handwritten manuscript to the last song ever written by the prolific songwriter, just days before his passing. Visitors will also be given an extensive look into Cash’s non-entertainm ent related life including his childhood and early adulthood and his service in the United States Air Force.

To stay updated on the museum and Johnny Cash, visit www.johnnycash.com. 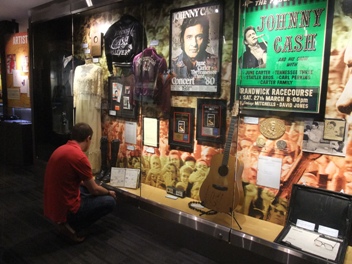 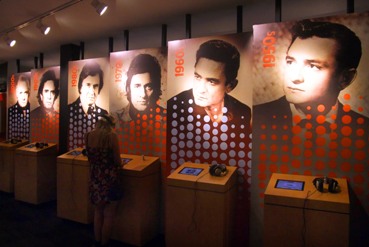 To receive additional information or high resolution images email us at tennessee@deep-south-usa.com.