Days out in Tennessee

There are so many things to see and do in towns big and small throughout the state of Tennessee.

Dollywood, The Smoky Mountain Family Adventure, is Tennessee’s number one attraction. If you only know Dolly Parton as a country singer, a visit to Dollywood will change your whole perspective. There are incredible rides galore at this Pigeon Forge 130-acre theme park, but there are also other activities as unique as Dolly herself with live entertainment shows, arts and crafts, fun festivals and plenty of food. Music is big here too and the Southern Gospel Museum & Hall of Fame is right on site. This Smoky Mountain Family Adventure is also host to a new festival each season.

The Tennessee Aquarium is the crown jewel of Chattanooga’s attractions and sits adjacent to the city’s downtown shopping and nightlife, on a spot overlooking the Tennessee River. A portion of the aquarium is organised by geography – one exhibit contains freshwater animals from China to South America. The River Gorge Explorer catamaran takes visitors on a trip into the heart of “Tennessee’s Grand Canyon”, which has one of the most biologically diverse ecosystems in the world.

Enticing mountains, waterfalls and caves are close by and iconic attractions like Lookout Mountain, Incline Railway, Rock City and Ruby Falls, the world’s tallest underground waterfall, are less than 6 miles from downtown Chattanooga. Lace up your hiking boots and head to the mountains or wheel your bike along the paved 13-mile Riverwalk or one of the many mountain trails and you’ll quickly see why Bicycling magazine calls Chattanooga one of the Best Cities for Cycling. You can also go caving or paddle placid waters by kayak right from downtown, and for the more extreme adventurer there’s hang-gliding or white-water rafting.

In addition to having the country’s best state parks Tennessee is also home to some top national parks and forests. The most famous is Great Smoky Mountains National Park, which is the most visited national park in the country, more than the Grand Canyon or Yellowstone. Families can enjoy mountain biking, hiking, white-water rafting and horseback riding all year round, and in winter there is even the opportunity to go skiing.

Located in the city’s Overton Park, this phenomenal zoo was chosen as America’s No.1 zoo in a TripAdvisor poll. Featuring over 3,500 animals representing over 500 different species, the zoo has been a major tenant of Overton Park for more than 100 years. Opened in summer 2009 was the Rocky Mountain-themed Teton Trek; featuring grizzlies, timberwolves, trumpeter swans and elks. There are several new attractions planned for the zoo including the Zambezi River Hippo Camp due to open in 2011 and a 17-acre boardwalk exhibit that meanders through the 17 acres of forest land.

Ripley’s Aquarium of the Smokies in Gatlinburg, Tennessee

Ripley’s Aquarium of the Smokies was voted the No.1 aquarium in America by TripAdvisor, making it America’s most fun aquarium! This world-class 1.4 million gallon saltwater aquarium features 12-foot sharks in the world's longest tunnel and has over 10,000 exotic sea creatures meaning there are more fish in this aquarium than there are people living in Gatlinburg! A penguin launches from the water and lands feet first on the stony shore. It's a dynamic leap he and his tuxedoed friends perform all day in the new Penguin Playhouse within the aquarium. The exhibit features a clear acrylic tunnel through which visitors can crawl to see nearly two dozen penguins swimming around them in a 30,000-gallon tank.

Draped in diamonds and furs, socialites make a regal entrance while descending the grand staircase of the Titanic, anticipating lavish parties and smooth sailing on the maiden voyage of this superior vessel. But under starry skies, their fate changes. Experience what happed that night by joining other "passengers" at the new permanent Titanic Museum in Pigeon Forge. This replica of the famed ocean liner – built ina jaw-dropping half-scale exterior with full-scale rooms inside – recreates the Titanic's grandeur as guides in character (complete with English and Irish accents!) direct visitors around the ship, including through first-class and third-class quarters. 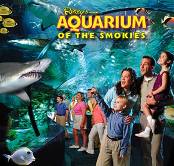 Ask an expert who's been to Tennessee
Start planning your Deep South USA road trip by contacting one of our Southern specialists.